Posted on February 16, 2016 by poolsandpastures 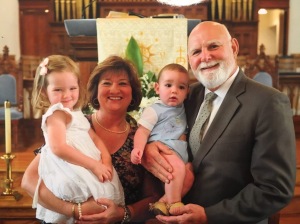 On October 6, 2015 Rick Davis turned 66 years old. For 36 of his 66 years he has been my dad, and somewhere along the way he affectionally became known as Big Rick. He has a rich legacy as a man who has lived a consistent, principled and hard-working life of devotion to our Lord Jesus Christ. And so, I dedicate the next several posts to him. After all, he taught me most everything I know about being a man, about being a husband and about being a father.

Out of all the lessons that Big Rick has taught me, I believe the most important have to do with the proper way to worship our great God. The Bible clearly tells us that we were created to worship God and that worshipping him is the most important thing we will ever do. The Westminster Divines famously stated that our chief end as humans is “to glorify God and enjoy him forever” (WSC Q1).  And, though I can’t remember Big Rick ever quoting that statement to me directly, he certainly believes it. His belief demanded — and still demands — that he and his family set aside the Lord’s Day as the day for the corporate worship of our Triune God.

Sunday is the Lord’s Day.

I was in seminary when I first read section 21.8 of the Westminster Confession of Faith, which states, “As it is of the law of nature, that, in general, a due proportion of time be set apart for the worship of God; so, in his word, by a positive, moral, and perpetual commandment, binding all men in all ages, he hath particularly appointed one day in seven for a Sabbath, to be kept holy unto him…” The Confession goes on to say that “the first day of the week, which in Scripture is called the Lord’s Day” is “the Christian Sabbath.” This language was fresh and new to me, but the concept wasn’t because Big Rick had instilled in me from a young age that Sunday is the Lord’s Day. Therefore, we worshipped the Lord on the Sunday. We devoted ourselves to him on that day. We ordered our family’s schedule to ensure that we were available to worship the Lord each Sunday.

I remember faking an illness one Sunday when I was about 11 or 12 years old because I didn’t want to go to church. I wanted to stay at home. I’m confident that Big Rick sensed that I was faking, yet he didn’t stand strong in opposition. He and my brother went on to church while my mom stayed home with me. Later that afternoon, my friend from up the street invited me to come play basketball with him and some of our other friends. I wanted to go. So, I got dressed, laced up my shoes and headed out the door. As I was leaving, Big Rick asked, “Where are you going?” I said, “I’m going to play basketball.” He responded, “No, you’re not. You’re sick.” I protested, “I’m better.” He said, “No, you’re not. You’re still sick. You were too sick to go to church this morning, and you haven’t gotten well enough to go play basketball.” I shot back, “But Dad…” He graciously replied, “Son, you need to understand that if you’re too sick to go to church, then you’re too sick to do anything else. That’s the rule in our house.” That was the end of the conversation. It was over. I was staying at home. Point made.

Sadly, that little episode will seem harsh to many in the Christian church today. It shouldn’t, but it will. I was not negatively effected by Big Rick’s rule on church attendance. In fact, the opposite is true. By refusing to let me go play basketball after I faked an illness to get out of worshipping the Lord, Big Rick made me realize that worship is important. It is a matter of obedience to our God who sits enthroned in heaven, who loves us, and who has drawn us to himself in his grace. It was a priority for our family. That was a lesson that I desperately needed to learn and one that helps shape to this day. (I also needed to learn that lying was wrong, but that’s for another post.) Worship is imperative for God’s people because God commands and deserves our worship. Sunday is his day.

I wish we had more fathers and mothers who made the corporate worship of our great, Triune God a priority with their families. We can say that our faith and worship is most important to us, but our actions speak louder than our words. Big Rick didn’t need to tell me repeatedly that Sunday at church was the axis around which our family rotated. He made it plain by his insistence on worshipping alongside of my mom, my brother and me each Sunday. I thank God for him and pray that he will give us more Big Ricks. If God answers that prayer, the Church will be much stronger. That’s a guarantee!

← Happy Thanksgiving and A Blessed Advent
Worship is About Jesus. →

2 Comments on “Lessons on Christian Worship from Big Rick, pt. 1”